Speaker , Human interest/Behavoir
The artist is residing in Antwerpen 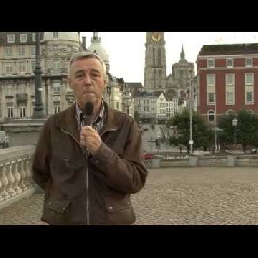 What the people of Antwerp don't (want to) know
A surprising story for (non-)Antwerpers! What or who is a Sinjoor? Suitable for the real Antwerp inhabitant, as for all those interested in all the clichés. Get to know them all during Harry van Helst's lecture!

This is above all a 'fun' lecture!
Suitable for the 'real' people of Antwerp, as well as for all those who are interested in where all those clichés come from anyway?

In this lecture Harry does light up some veils (not only the tips), but he doesn't spare the people of Antwerp themselves at all!
But he does this in such a pleasant self-motivating way, that everyone feels appealed to both another Fleming who wants to puncture those jokes about 'the parking' for once, and for example a Dutchman who wants to come to Antwerp and have a good time.

Profile
Harry is born and raised in Antwerp.
As a boy of ± 10, Harry imagined that he didn't want to live anywhere but under 'his' cathedral.
So it happened! For years now, he has been living in his self-restored medieval house in Haarstraat, in the middle of the car-free zone of the historic centre of Antwerp. So he can say: 'if the tower should ever topple over in the right direction, the cock will be on our roof'.

Real Jef Geeraerts fans are guaranteed to have seen the address 'Haarstraat nr 11' at least twice in their lives, because Jef was born at that address "... in the well heated kitchen of Haarstraat nr 11, a building belonging to my grandfather Jef Geeraerts sr., in the shadow of the cathedral, within earshot of the honking seagoing ships on the Scheldt" And "The building no. 11 in the narrow Haarstraat looks equally dilapidated. The plastering is cracked The high narrow front door is painted shiny green." (from Gangreen 3 'The Sign of the Dog').

For years Harry was editor and columnist of De Streekkrant ('E3 Groot Antwerpen') and of the first 4 colour newspapers in the region: 'Ons Antwerpen'.
He played several seasons with Gaston and Leo in the primeval Antwerp play 'Slisse bouwt' and got a role (as a policeman) of Robbe De Hert in both Bleuberry Hill and Brillcreem #####://####/watch?v=VYAsrc4s3TM
He was also a member of the Antwerp Urban Youth Council for many years and was responsible for the public relations and press relations of the 'Vrienden van Semini' (cf. the bas-relief above the castle gate of Het Steen)
So Harry can really say that he knows 'the cookie town' and its inhabitants like the back of his hand.
It's hard to say otherwise with his cobbler at St.-Paulus, his copy centre at St.-Andries and his parking lot next to City Hall!

Formulas
A lecture with interactive possibilities, about the Antwerp that is rarely discussed and this in 2 versions:

Version A A version for foreigners and Flemings from other provinces
+ How can one (try to) put the citizen of Antwerp with his proverbial 'thick neck' in place?
+ Is it true when they say that their nickname 'Sinjoor' is not a mockery but a title of honour?
+ Do they have reasons to be so proud of the fact that they live in Antwerp?
+ Is it really better in Antwerp than in the rest of Flanders or worse, than in the rest of 'the world'?

Version B A version for those who proudly call themselves a 'Sinjoor' (at least until that lecture ...)
+ Do we know as much about our city as we say we do?
+ Do we really have such a thick neck or do the others have an inferiority complex?
+ Is it an inhabitant of Antwerp or a Dutchman who founded New York?
+ What about the Pagadder and the Sinjoor?

Extra:
1) Each of the above formulas may be complemented by an interactive quiz (± 30 minutes) in which EVERYONE of the listeners present may take part (provided sufficient space and, if necessary, sound amplification is available).
2) If you would like to combine the lecture with a (pub) tour through Antwerp with Harry as your guide, then of course this can also be (instructive) fun guaranteed!

Hire or book Harry van Hest on Antwerp is best done here via Showbird.
This act is suitable for event types:
Business party Reception Fair / Congres
You have 1-on-1 contact with the artist
or his/her personal manager.
Do you have a question about this act?
Pose it in your request for the artist.