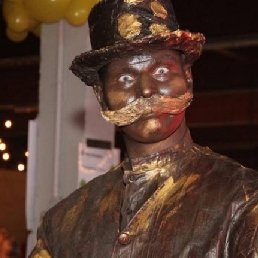 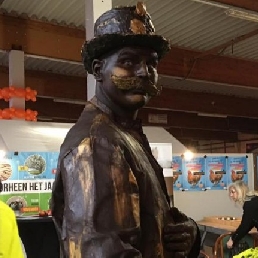 From time to time, this circus director will unpack his charms or mischievous traits. Inviting interaction. That's what always makes this living statue a success. Now to book on ShowBird!

Honored audience! Ladies and gentlemen, boys and girls, welcome to the circus!

At the request of a customer we made this act: the circus director. He stands on his pedestal, oversees everything and greets the audience friendly. Sometimes he also takes his walking stick and parades through the audience, always greeting them kindly. This act is one that goes back to basics, back to the circus life of yesteryear. Of course the circus director possesses a good dose of humor which he is only too happy to display for his honored audience.

The act is based on a performance of 4 x 40 minutes. Leave your specific wishes in the request!

The living statue also has a name and is called Patrick van Horne. He is over 30 and a teacher by profession. This educational background makes it easy for him to stand in front of groups and animate them. Patrick has been doing animation since 2000, first as a clown, later the statues and walking acts were added. Patrick about his motivation:

Hire or book Circus director is best done here via Showbird.
This act is suitable for event types:
Fair / Congres Festival Shopping / Market Holiday / Local feast
You have 1-on-1 contact with the artist
or his/her personal manager.
Do you have a question about this act?
Pose it in your request for the artist.