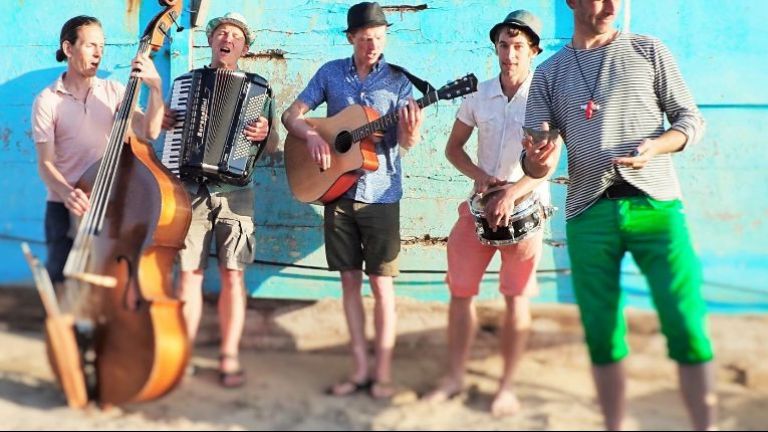 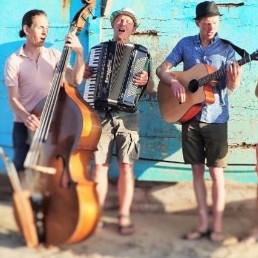 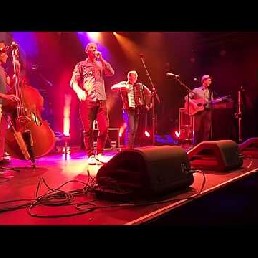 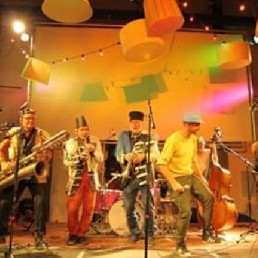 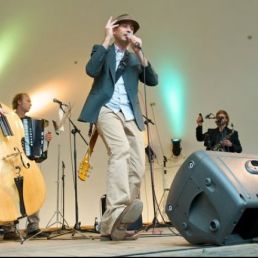 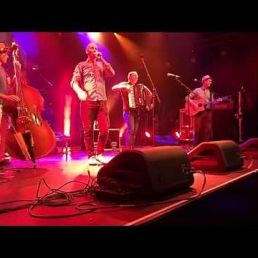 Professional party band now temporarily at Showbird introduction rate.
Alfon Oekie is Danceable, Cheerful and suitable for creative parties, openings, weddings and festivals
In short: A smooth live act with a soothing afterglow!
We give you a feel-good experience to lick your ears.

Alfon Oekie is a household name in Alkmaar and a popular act at festivals and parties in the rest of the Netherlands. The five stubborn band brings a special sound by a creative hutspot of danceable world music, folk and alternative pop.
The musical roots of the permanent members are quite diverse and exotic. Martijn Komen, for instance, tirelessly fires the Balkan fire with his inseparable accordion. John Eilert conjures up harmonies with his guitar and ukulele. Drummer Yoram van de Reep gives you firm punches and rhythms in front of your ears. And then there is the inimitable string wonder Bart Meeuse, who, with his gigantic double bass, silences everyone in his raging downpour of high and low tones. With these top musicians, Friso Vonder as a stage magician enchants the audience with his lyrical and sometimes stirring songs that are rarely without a message. Alfon Oekie has a simple motive; being himself, celebrating life and filling hearts with fine music.

Alfon Oekie
Pak Aan
Do you have a question or wish regarding the repertoire? Mention it in your request.

A very nice band and also five nice pears. They were the first musical act of the evening and they managed to attract the audience immediately and put a smile on their faces. Their worldly sounds turned HAL 25 into a swirling mass of dancing people. A kind of mix of world music, alternative pop, balkan music or put it in another ukie. At least it was worldly good!

Hire or book Party band "Alfon Oekie" is best done here via Showbird.
This act is suitable for event types:
Wedding Birthday Celebration / Jubileum Student party Sports event Business party Opening Horeca line-up Festival Holiday / Local feast
You have 1-on-1 contact with the artist
or his/her personal manager.
Do you have a question about this act?
Pose it in your request for the artist.

The artist is residing in Bergen (Noord Holland)(NL)