Band , Jazz
(3 reviews)
The artist is residing in Deventer 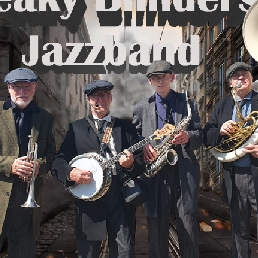 In principle we are mobile

Uncomplicated accessible Jazz music.
Founded in 1990, the Piece of Cake Jazzband from Deventer has proven to be a constant factor in the Dutch Jazz- and Dixielandcircuit. The band performs as a 4-man formation in more or less changing line-ups.

High priority is given to making music professionally with musician friends, in the firm belief that this is the formula for success with which this pleasant and accessible music should be brought into the limelight. The orchestra performs casual, catchy and recognizable Dixieland, and this in various Theme clothing. Now also in the style of the popular television series Peaky Blinders.
Duration and price:
- 4 hours
- € 785- for 3 musicians
- € 910- for 4 musicians

At our roaring 20 party, the 4 piece band played at the reception and the 1st hour. Great music, professional musicians, we enjoyed them immensely

Totally top notch, exactly what we were told to expect!!! Recommended.

On Monday morning 20-12 the rehabilitants of the Switch were pleasantly surprised with a performance of 3 musical gentlemen. Several Christmas songs were brought to life where people carefully sang along, but especially where they played along In any case, it was fully enjoyed and the gentlemen were praised in their ability. The applause was loud after every song. Afterwards the gentlemen were allowed to enjoy a cup of coffee and some cake; in the fresh air this was a pleasant surprise for them! Then they had to hurry to the next performance.

Hire or book Peaky Blinders Jazz Band is best done here via Showbird.
This act is suitable for event types:
Wedding Birthday Celebration / Jubileum Student party Sports event Funeral Business party Reception Fair / Congres Opening Horeca line-up Festival Shopping / Market Holiday / Local feast
You have 1-on-1 contact with the artist
or his/her personal manager.
Do you have a question about this act?
Pose it in your request for the artist.