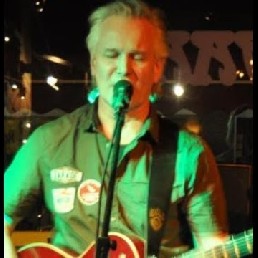 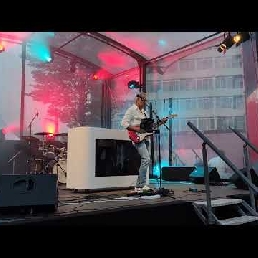 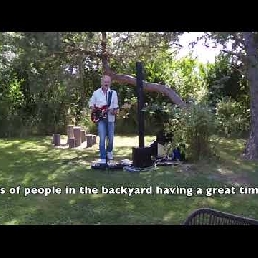 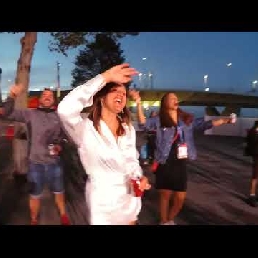 It doesn't take much space. Another big

The atmosphere and sound of a complete band interpreted by 1 person. References galore. For garden parties, birthdays, weddings, pubs and everything where live music is needed. Success guaranteed!

Robert is an experienced musician who turns any party into a roof off party
This is truly one of the best (one man) bands or solo acts around
Very suitable for weddings, birthdays, garden parties and all other parties where live music is desired
The repertoire consists of well-known modern and older songs
The repertoire has a high party content. Robert plays "just" songs that everyone recognizes and can sing along and it sounds terribly good. By the way, the playlist below is not complete. It is much more extensive and requests are of course welcome.
This is not a singer singing quietly in the background with an acoustic guitar but a real one man band.
The music world is changing at a rapid pace. You used to need a whole band but that is no longer necessary today. Why book a full band that takes up a lot of space, sounds less tight and is also more expensive when you can take a solo artist who sounds better as a full band?

How does the solo performance work?
Robert accompanies himself on guitar in combination with his self-recorded studio tracks which are controlled via a looper
A performance with these tracks sounds even better than a full band and the advantage is that any sound volume is possible. Because he plays the tracks himself there is no second artist that sounds the same. Everyone who has heard it so far has been pleasantly surprised. Feel free to contact neighborhood clubs, halls, cafes and private individuals to get a good idea about oneman band performances. Addresses can be obtained through the messaging option on Showbird

The sound system Robert uses is very compact but oh so powerful. The performance will never be too loud but very nice. The most heard reaction from the audience is that it is very special that nowadays you only need 1 person to play a complete band. Another big advantage is the time it takes to set up. That never takes longer than half an hour. A sound check? Not necessary, especially at weddings it can be distracting

New is the special show with songs of deceased artists, think of Bowie, Herman Brood, Prince, George Michael, Michael Jackson, leonard Cohen, ACDC, Chuck Berry, Elvis and so on. This is very suitable for small theaters. With the help of a beamer show, a journey through time is created and all the influential music of deceased artists is played from young to old.

Ed Sheeran
Shape of You

Stretch
Why Did You Do It - Remastered

Coldplay
Viva La Vida
Amy Macdonald
This Is The Life

The Proclaimers
I'm Gonna Be (500 Miles)

Oasis
Don't Look Back In Anger

Queen
Crazy Little Thing Called Love - Live at Live Aid, Wembley Stadium, 13th July 1985
Do you have a question or wish regarding the repertoire? Mention it in your request.

What a great party Robert Harms makes of it! Empathized well with our wishes even if he has never played a song or genre before. For us Rock and Roll aka Elvis on request and Andre Hazes sr for the party boy. Really great!!!

As a surprise act for Peter's birthday, what a great night we had especially because of this fantastic performance, so professional and quality, could not have made a better choice, only compliments from our guests they made our party ?

Contact went well. Artist is very flexible, amplification was well adapted to the location. The choice of music was made in consultation and turned out very well. Nothing to complain about!

Online performance for charity. Time stood still for a moment. The performance was great and the repertoire was a big hit. As soon as this bloody corona is over we will invite the band for a real face to face live performance. Highly recommended and this is the first band to combine old-fashioned craftsmanship with modern technology

Robert gave us a fantastic afternoon with his singing and music. Extensive repertoire of rock but also danceable music. Definitely worth repeating!

Robert: it was a fantastic gesture and a wonderful performance!

Coronacrisis, about 150 70+ people who are plummeting behind the geraniums. You don't have any money, but you do have a turret with a roof terrace. So what do you do? Solo artist Robert questions, right?! Very kind, patient, because it has to be with nice weather and when the day arrives ... A splashing performance under the hot sun. Nice playlist of 60-70'ies and of course OhOh The Hague, because we are in the middle of that center. Robert: it was a fantastic gesture and a great gig!

When I heard that Robert was going to perform mostly covers, I was hesitant. My doubts were quickly washed away because he has such a unique and entertaining personal style, that he can give the original artists a run for their money, regardless of genre. Working with him was easy, and watching him performing is truly entertaining.

What a lovely band!

All appointments were well fulfilled and communication was very fast and good We could have a look at the rehearsals we enjoyed In short, a great relaxed band and good quality band that made a big contribution to the success of our party. There was a lot of dancing and the songs fitted our taste. In short, great!

It was a fantastic performance

It was a fantastic performance. Everyone was very enthusiastic and we will definitely ask Robert again.

Hire or book Solo artist one man band Robert Harms is best done here via Showbird.
This act is suitable for event types:
Wedding Birthday Celebration / Jubileum Student party Sports event Business party Opening Horeca line-up Festival Holiday / Local feast
You have 1-on-1 contact with the artist
or his/her personal manager.
Do you have a question about this act?
Pose it in your request for the artist.