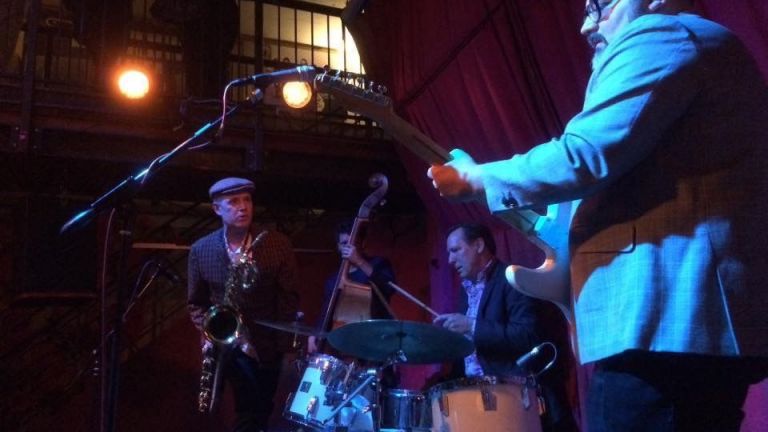 Working Voodoo Club are a Amsterdam-based 4-piece R&B-Mod Jazz band with a sound and style inspired by Rhythm & Blues, Groove Jazz and Soul records from the 1950’s and 60’s. The group has just released their new CD “ONE”, which already received great reviews.

Working Voodoo Club is a musical journey started in 2008 by Fabrizio Carrieri, band singer, guitarist and composer of all original tunes in the repertoire .
​
Through the years the project has evolved from a Rhythm & Blues cover band to a seductive show with original tunes and cover versions, yes inspired by the american Blues, Soul and Jazz tradition, however shaped in a very unique style.
​
The combination of baritone sax, guitar, double bass and drums creates a strong and hypnotic sound that will catch anyone.
​
Working Voodoo Club has already rocked many venues / festivals, such as Amsterdam's Paradiso, Viva Lola in Belgium, Pacific Parc, Ekko, DBs, Rolling Kitchen festival, Aprilfeesten, Boekenbal, Duycker, Kleine Hedonist (Antwerp), Flux, Burlesque Kingdom, Zappop, This Is The Party (Taranto, IT.), North Sea Jazz Club ...
​
The band has recently released their new album, ONE, available on CD and as digital download on Bandcamp
​
In 2014 WVC has released their first 7' inch vinyl single EP, DO IT ALL NIGHT, on Tardam Records.
​
The actual line-up of the band is composed of seasoned musicians well known in the Dutch music scene: :
​
Fabrizio Carrieri: Vocals, Guitar, Composer, Producer
​
Mikkel v/d Meulen, Baritone Sax
​
Gerco Aerts: Double Bass
​
Victor De Boo: Drums

"In a parallel universe there is a bar where the rhythm and blues is suitably sleazy, the guitars twang, the vocalist leers, and those drums, they make you dance. You knock back your beer with a bourbon chaser, the night is an adventure and you never want it to end. The Working Voodoo club are that band!
I love it - listened through twice, and sounds great. Retro, but without being a pastiche"

Review by Tony Face Baciocchi, amazing musician, producer, writer, and Italy’s #1 music blogger:
​
“They come from Holland but to guide them there is an old acquaintance of the Italian scene, that Fabrizio Carrieri who gave birth and led one of the first long lasting mod Italian bands, the Apulian THE ACT (After an early career with Steady Beat).

Started in 2008 with a classic set-based rhythm and blues, Working Voodoo Club have evolved towards a sound that, although always influenced by those wild beginnings of black music at the turn of 50's and 60's, but with in addition jazzy, swamp blues moods coming straight from New Orleans, like some old record of Dr. John, the soul funk taste of Professor Longhair, or flavours from Los Lobos "Kiko".