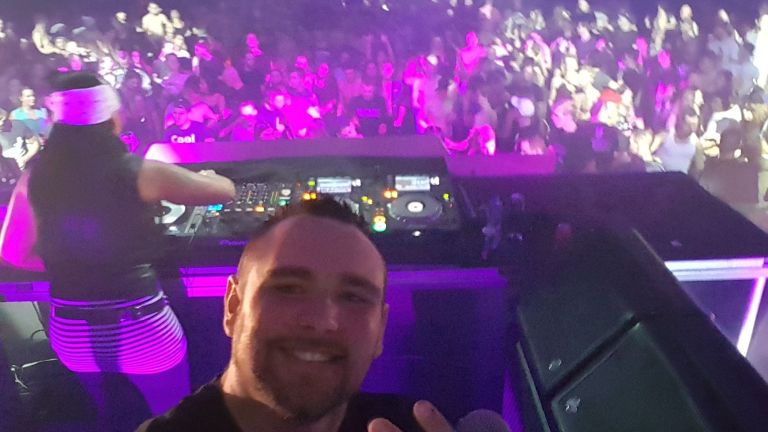 MC Dynamic's first introduction to the stage was completely by chance; what started as a night out clubbing with his friends, quickly turned into an evening he would not soon forget. Due to the fact that the resident MC didn't show up at the gig, his friend Ozzy Housebourne simply handed the MIC over to him, thereby throwing him off the deep end with a daring and daunting mission; entertaining the visitors during his set. Relying on his rap and hiphop background he just freestyled as if he'd done it a thousand times before, and gave the crowd exactly what they wanted: a party to remember. This proved to be the beginning of a promising career. He is being coached by Da Mouth Of Madness known from Thunderdome and a real hardcore Legend !! Now, after 2 years, one can safely say he's earning his stripes in the music industry as a highly versatile and adaptable MC, and most importantly; has gained the respect of some legends such as Darkraver ,Deepack , Pavo , Luna , DR Rude , AudioTricks ,some house DJ,s like RawHouse , Mode De La FvNk , Ozzy Houseborne , Difesa , Deck-R , De RottJoggies , Kimberlee Ramirez , Rajeev Gaultiero , Afro Bro,s Swolenbeats , Go Bang The DJ , Revine. And some hardcore dj,s like Damage , Zantara , Satanism , Psycore, The Prozac, Mantello , Kader , Warmachine , Ednozem , Sandocan , Bartello , XTRA-Long , Bart Van Dijk while performing at numerous clubs like : Loft Anhem - Hemkade Zaandam - Club Bollee - Envy Zoetermeer - Platinum Arnhem - North Sea Venue and hosting for organisations like . Press2PLay Events - Beach Party Festivals - Moonligt goes Early. Armed with his MIC and infinate inspiration on stage you will not be dissapointed by his performance. He will blow you away with his skills, supporting the DJ's in a very natural way and lifting the crowd to a higher level. They say some things in life are ment to be. Well, MC Dynamics is definately born to please a crowd and keep them going. So, if you want to spice up your event with a 'dynamic' host, he will bring you exactly what you are looking for.