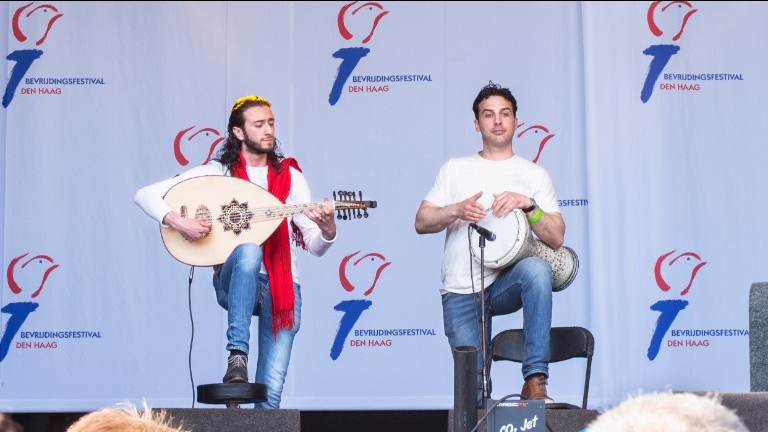 Refined sounds of the Ud accompanied by a rhythmic display on the Riq and other percussion instruments. Amer gives the special art on the strings of this instrument together with Karim Darwish on Riq (Percussion). and makes you travel with him on a beautiful musical trip.

Hello, my name is Amer Shanati. I am a citizen of the Netherlands, born in Syria from Palestinian roots, and I call The Hague home. My life’s work is music. I teach, perform, write, and work with music for peace.
I am a private music teacher. I specialize in the oud, an Arabic lute.

I am Founder and teacher of The Hague Children’s Orchestra for Peace and director of the educational project at Music for Peace. Many performances as solo artist, band member, workshop leader in the Netherlands, Syria, Switzerland, and Belgium with organizations and foundations including The Hague Projects, United Nations, Carnegie Peace Palace, Justice and Peace, Amnesty International, Hague Talks, VluchtelingenWerk NL, Musicians without Borders, De Vrolijkheid, Bijnlands Lyceum, Musical PostCards.

I studied at the Music Institute in Homs, Syria, and the Royal Conservatoire in The Hague, the Netherlands, and I am the author of two books: Eastern Musical Theories and Reading the Musical Pieces. I also teach the origins of both eastern and western theories.