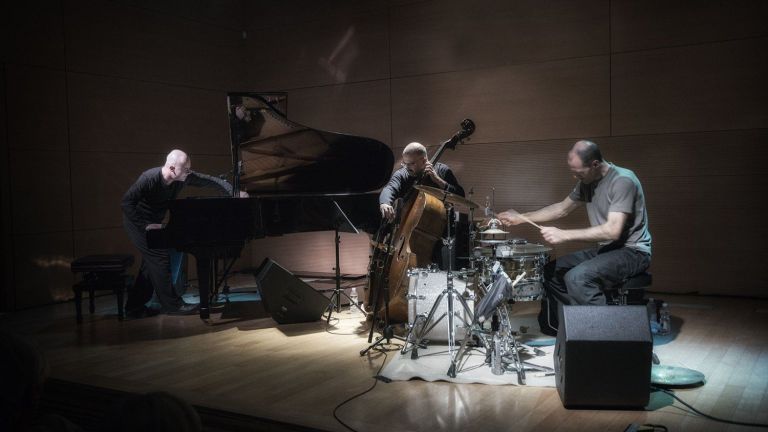 Born in Milan, he began to study piano when he was seven years old. His classical career includes several italian and european festivals, hundreds of concerts as a soloist .
In particular he played baroque (mostly Bach, Scarlatti and Haendel) and XVII century program and modern

music
(mostly Hindemith, Boulez Messiaen and Ligeti). In 1986 he was invited to the J.S. Bach Festivals;
in 1991 he performed as soloist of the Orchestra Giovanile Europea.
Moreover he was invited at the Swiss Radio and Italian radio - television to play the J.S. Bach's Art Of The Fugue and Partitas, and English virginal music from the sixteenth century (Fitzwilliam Virginal
Book
).
In the jazz scene he was awarded as best new talent of 1988 and 1999 best italian musician from the magazine Musica Jazz.
His several collaborations includes all the best italian musicians and several international artists as Lee Konitz, Kenny Wheeler, Dewey Redman, Tony Oxley, Barre Phillips, Steve Swallow, Enrico Rava, Aldo Romano, Bill Elgart, Dominique Pifarely, Jay Clayton, Pierre Favre and many others.
He played more than 3000 concerts as an improviser in all the most important festivals and in many international appointments all over the world.
He recorded more than 100 cd (mostly as a leader and ten for solo piano), received many awards for his solo piano and trio recordings.
Besides the solo performance, he focused his research on the trio format (piano bass and drums) and on the duo piano- percussion format (with Tony Oxley, Pierre Favre, Bill Elgart and Michele Rabbia)
Actually he teaches in Siena Jazz jazz masterclasses from 1988, and from 1996 he has been conducting the Laboratorio Permanente di Ricerca Musicale which is a workshop on musical research, improvisation, composition and creation in music.
He transposed in music all the 56 poems of the Die Sonette an Orpheus cycle by Rainer Maria Rilke and a work based on Juan de la Cruz (1542-1591) text (Monte Carmelo The Mystic mountain).
He worked on The
Book
of Songs, a large program based and inspired from the evolution of the song form from the fourteenth century until today.
He studied the music of Alec Wilder and create a monographic program called The music of Alec Wilder: Art Songs, Popular Songs, based on the Wilder’s wide and extensive production as a composer (ECM new release, 2015 October). He created an opera through popular and contemporary languages celebrating Pier Paolo Pasolini and Rothko Rooms, a series of compositions joined to mark Rothko paintings.
Since 2004 he is recording as a leader for ECM Records (six records: double album Raccolto, double album Re: Pasolini, Pastorale, The River of Anyder, Songways, In the Morning).

JAZZ TIMES
Battaglia is a rare artist who plays with fearless freedom and meaningful precision.
A strong case can be made that the best European Jazz is coming out of ##### five albums that Stefano Battaglia has made for ECM contain the strongest work released by an ECM pianist during the last ten years.
Thomas
Conrad


CADENCE
Battaglia has been compared to Keith Jarrett and Cecil Taylor, and has devoted recordings to the music of Bill Evans.
At this stage of his career, such comparisons are less a matter of stylistic derivation than suggestions of the pianistic quality of his work, he is simply one of the beautiful pianists in the world, with the same amalgam of precision and sonority, delicecy and strenght, that distinguishes the best of italian pianists, whether classical (Arturo Benedetti Michelangeli, Aldo Ciccolini, and above all, Maurizio Pollini) or jazz (Enrico Pieranunzi).
His music is highly recommended to those lovers of piano music who are more concerned with quality than with categorizing what they’re hearing.
Stuard Broomer

JAZZ TIMES
Battaglia is a rare artist who plays with fearless freedom and meaningful precision. A strong case can be made that the best European Jazz is coming out of Italy. Thomas Conrad

DOWNBEAT
Battaglia is a rare pianist who falls into neither category. There are flashes of heroes Paul Bley and Keith Jarrett, Battaglia’s gift for lines that cohere to the point where they are melodic, but avoid the yokes of song structure and standard cadences, diffused by passages that evoke everything from early music to post-serialism.
Bill Shoemaker

JAZZ JOURNAL INTERNATIONAL
Battaglia has both a superb touch and a finely judged and extremely potent rhytmic sense: he can swing wonderfully hard and well but will also phrase forms in a much less syncopated, or more European-classical
manner
.He is also unusually sensitive to the various textures of the chamber-music: make a very strong case for the current maturity of creative, strongly jazz-inflected but undeniably European music
Michael Tucker

JAZZ VIEWS
Battaglia’s playng share an improvising aesthetic more rooted in a classical approach than the mainstream jazz tradition –no surprise given Battaglia as a classical performer too- explores tenebrous but heated territory, defines a subtle and peculiar kind of beauty John Kelman

THE GUARDIAN
Another formidable European keyboardist who reveals plenty of the graceful precision that made him a successfull classical concert recitalist, jazz roots in Bill Evans, Keith Jarrett and Paul Bley, and the openness that has often found him working with free- improvisers.
His music is yearningly romantic in an open-structured way, full of classical allegiances, melodical audacity, lustrous accumulations and overlays of chords, trickles of treble sound and spacey improvisations.

JAZZ TIMES
Stefano Battaglia create and offer new concepts of lyricism, sometimes notated, more often discovered in spontaneus acts of the imagination never to be repeated. Written or improvised, music played by battaglia sounds inevitable, like it has always been there.

FREQUENCY
Never another Italian musician seemed so in line with the musical taste of Manfred Eicher, Ecm producer and patron.


ALL ABUT JAZZ U.S.A
Battaglia's inspiration is centuries old, but his music is timeless.

CD AUDIO REVIEW
The music output of classical-trained Italian pianist Stefano Battaglia is characterized by a connubial between modern jazz and contemporary classical music, with dense atmospheres, harmonic experimentation, complex patters, that might be not immediately entertaining but rewarding repeated listening. In other words a perfect match to the ECM musical
canon
. His previous works were more experimental and intellectual, thiis more lyrical, immediate, fresh, still preserving the complexity and sophistication of Battaglia musical ideas and approach. A mature work where entertainment and experimentation are beautifully balanced.

JAZZ TIMES
Th five albums that Stefano Battaglia has made for ECM contain the strongest work released by an ECM pianist during the last ten years.