Band , Party
(14 reviews)
The artist is residing in Deinze 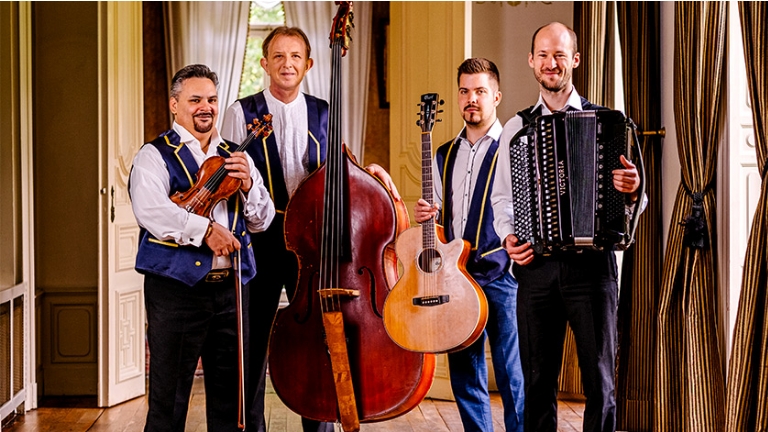 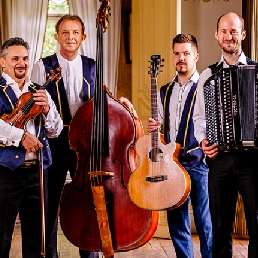 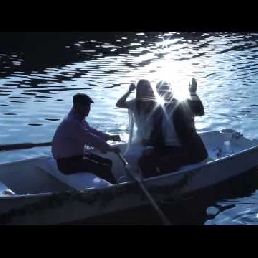 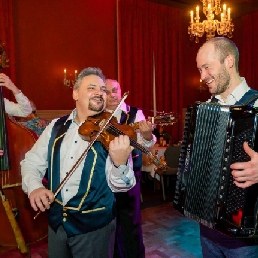 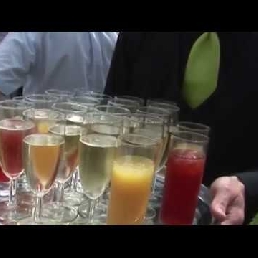 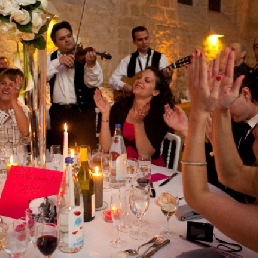 Kalinka Ensemble can move between your guests and play the melodies you like to hear, also on request. The four musicians create a unique atmosphere with their instruments violin, accordion, cymbalom/guitar and double bass.

Kalinka is an acoustic ensemble centered around violinist Pal Szomora.
Just about all known (and also lesser known) melodies he knows by heart, and plays on demand.
The musicians move among the audience and all genres of music are possible.
Gradually background music evolves into full ambiance, and yet not too loud because the orchestra plays without sound amplification.
Accordion, guitar and double bass accompany.
The full cast is quartet - a trio is sufficient for smaller parties - and duo is also possible.

Kalinka Ensemble distinguishes itself from many other groups by playing, whenever possible, without amplification.
The warm atmosphere of purely acoustic music cannot be compared to electronically amplified music (whether produced by a DJ, a musician or an orchestra). Moreover, an added advantage is that no one complains about the music being too loud.

Kalinka can always be used as a mobile orchestra. The musicians like to move among the guests if that can contribute to the atmosphere. This automatically creates a warm contact between musicians and guests, request songs are played with a smile.
An additional violinist or violinists is always possible.

Kalinka originated as a gypsy orchestra for parties. You can still find plenty of similar orchestras in Budapest, in the low countries they are becoming rarer and rarer.

Musical preferences are quite different and Gypsy musicians always take this into account, because their music must first and foremost please the guests. They often sing along spontaneously or dance.

Kalinka builds on the centuries-old European tradition of restaurants with live Russian and Hungarian gypsy music. In Paris, Cabaret Sheherazade was at the top - in Brussels, "Au Grand Mayeur" on the Sablon was a household name, as was restaurant Piroska in Antwerp.

In addition, orchestras without a permanent venue also emerged, including Laci Lakatos, Violino Cigány, Baro Chavo, and, of course, Kalinka Ensemble, which on the one hand cherishes tradition, yet regularly adds contemporary music to its repertoire, popular sing-alongs are thus certainly not taboo.

Mary Hopkin
Those Were the Days

Zigeunertrio Kalinka
Romance
Do you have a question or wish regarding the repertoire? Mention it in your request.

What a great experience! Fantastic musicians! Ambiance assured. (via Google)

Last Saturday we got married. An informal party with family and friends in the garden. Kalinka graced the reception with gipsy jazz and authentic gypsy music. And they did a fantastic job! Everyone was over the moon; a big thank you! (via Google)

A huge repertoire, in addition to gypsy music they also play many well-known songs from the French chanson, klezmer, music from famous movies, .. (via Google)

The Kalinka ensemble played at my wedding. They showed great professionalism. The repertoire was great and their energy contagious. I recommend this set without hesitation! Thank you Herman and your team! (via Google)

The party was super successful for us and was given so much more grace by your music which unfortunately I couldn't actively listen to enough. You are perfect in creating non-intrusive elegance, atmosphere and beauty! We will definitely repeat it in the future!

Your performance yesterday at Auberge Du Pêcheur may be called very successful. We received many enthusiastic reactions. Your performance gave an extra touch to our anniversary.

Herman, we thank you for this fantastic performance; It added a great deal to the success of our anniversary. You are a wonderful trio who bring a lot of atmosphere, the atmosphere was immediately there because of you. Everyone enjoyed it, especially our Hungarian and our pseudo Hungarians, for them it was also an opportunity to use Hungarian a little in practice. Me too, because I am a great lover of that Oriental music, we regularly go to Latvia and go to a Russian restaurant there where there is also live music, and remember if you put a few Russian together with some vodka and a cigarette the song book is guaranteed to come up and there will be singing late into the night, or until the vodka runs out! In Hungary, we go to village festivals a lot and there we also enjoy the csarda music. Thanks again, you were fantastic, Robert.

Without you the party is not complete

I want to thank your ensemble and yourself for the musical decoration of a very successful birthday celebration of my father. Apart from the unexpected interruptions (I was equally surprised), which you solved very professionally. The whole thing was very much appreciated by our guests, and we continue to get good feedback. Without you I would really dare to say that a party is not so complete. So kudos to you. I also hope, even with the little contact I had with you, that it was satisfying for you.

We would like to thank you again for the beautiful music, both during the celebration of Mass and during the reception. We received very positive comments from family, friends, pastor,.... very positive comments. The virtuosity of the musicians is wonderful. We hope to see and hear you perform many more times. We were already folk lovers but have now discovered a new genre that is definitely worthwhile. That's why we ordered your CD by the way.

Hereby we wanted to thank you again for the unforgettable evening last May 16th,we are still talking about it (and our family too)!!!! Good luck further!!!

We just wanted to drop you a line and tell you we really enjoyed your music at our wedding in Bruges. We had a wonderful day, as did our guests and we wanted to offer our sincere thanks for your contribution to such a great experience. We wish you the best of luck in the future. Many Thanks, Rob & Sue

We would like to thank you especially for taking such good care of our wedding celebration and our reception pleasantly surprised that everything was so beautiful, it fitted perfectly with what we had imagined without knowing you. We were very satisfied and thank you very much.

Still, I did not want to neglect to thank you and your musicians for gracing our Christmas party. The music was enjoyed by everyone, without exception. May I kindly ask you to thank the three musicians on our behalf once again.

Hire or book Kalinka Ensemble is best done here via Showbird.
This act is suitable for event types:
Wedding Birthday Celebration / Jubileum Funeral Business party Reception Fair / Congres Opening Horeca line-up Festival Holiday / Local feast
You have 1-on-1 contact with the artist
or his/her personal manager.
Do you have a question about this act?
Pose it in your request for the artist.