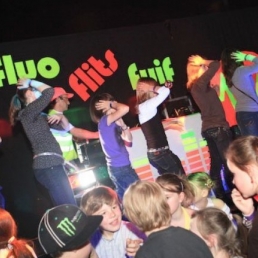 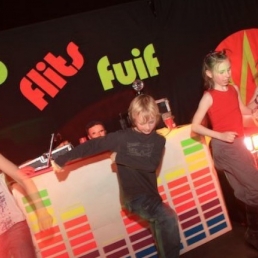 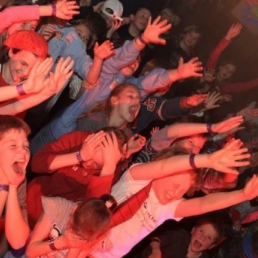 New booking now! Fluo-Flits-Fuif for the young partygoers! This extensive children's disco is especially designed for children up to 12 years old. Book Fluo-Flits-Fuif and conjure up your space in a true disco for the kids!

The newest attraction for children!
And then another one where they can be active themselves.

Puppets, silly clowns and magicians are all over the place. And they're right. Kids want music, kids want to dance. Preferably in a well-darkened room, with surprising light effects.

The smoke machine is brought up to temperature. As an extra you can bring dmx-controlled colour scanners and 3-colour lasers and a special light effect in the middle hall!

And this without hitting a single nail in the wall. Klutske brings all the necessary stands and material so that you, as the organiser, can enjoy the dancing fun of the children.

For two hours there is not only hip music and extensive lighting effects... the fluo-flash party is animated by klutske in an inimitable way. Not as a clown but as a seasoned DJ!
It's a much sought-after finale to MEGA projects.

A tip: fun for children to postpone the start time to the late afternoon or early evening. That underlines even more that it's going to be something special... ...and that solves the problem of the perfect eclipse for many venues.


technical sheet:
3 to 12 years
no limitation in number of children
120 minutes, break included
can be customized
pitch-dark room
klutske brings his own professional light and sound + DJ and LJ

Hire or book Fluo-Flits-Fuif is best done here via Showbird.
This act is suitable for event types:
Kids party Business party Festival Shopping / Market Holiday / Local feast
You have 1-on-1 contact with the artist
or his/her personal manager.
Do you have a question about this act?
Pose it in your request for the artist.