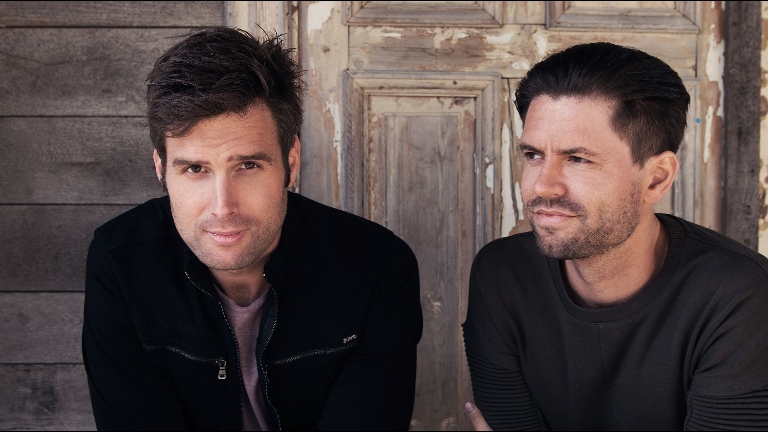 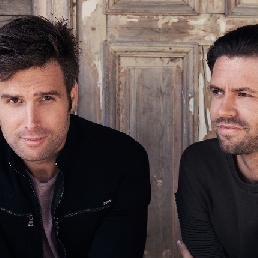 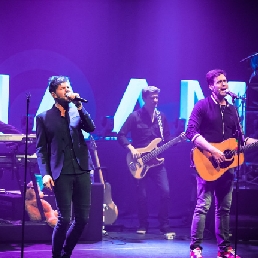 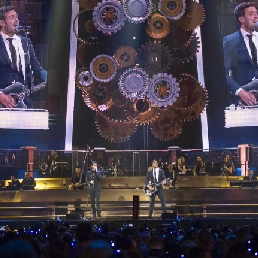 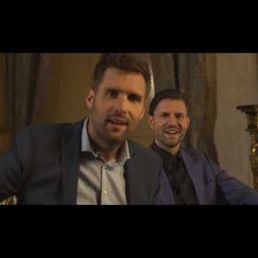 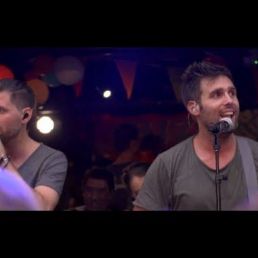 With their passion for music, the Volendam music duo Nick & Simon have been at the top of the Dutch music scene for years. The story of Nick & Simon and their road to success could have been a boy's book. With the many hits to their name, Nick & Simon ensure an unforgettable performance.

Nick and Simon and their live band provide a wonderful party. Old hits like 'Grab my hand' and 'Rosanne', alternate with the latest songs like 'Zing!' and 'Hier en Nu'. With their two beautiful voices, cheerfulness and enthusiasm they manage to enchant the audience every time. Nick Schilder and Simon Keizer are the music duo that turns every festival, company party or concert upside down

Hiring Nick & Simon for your party or event?
- Nick & Simon will play a set of 1 x 60 minutes on location with their band.
- Plugging in the available sound system

Other duration and customization are of course negotiable. Please mention this in your request.

Since Nick Schilder and Simon Keizer performed together in high school in the year 2000, they have never stopped. After a few years their first hit came in 2006 with the song 'Steeds Weer'. Their debut album came two months later and was in the Album Top 100 for two years. The following year they won the Silver Harp, the TMF Borsato Award and a Rembrandt. The duo's successful career had begun!

With great success the duo released their second album "Look Up" in 2007, which was followed by another album "Today". The Netherlands was far from being rid of Nick & Simon, as the albums remained in the charts for two years. The title song of the movie "Scheepsjongens van Bontekoe" was their song "Take my hand" and was received with great enthusiasm by the public and reached the number 1 position Single Top 100. But the success became bigger. With the single 'Rosanne' the duo was in the Single Top 100 for a total of 55 weeks

In 2009 Nick & Simon could be seen in the TV show 'De Beste Zangers van Nederland' (The Best Singers of the Netherlands). They also scored their third number 1 hit in the Single Top 100 with the song 'Falling Stars'. This turned out to be by far not the last one, as 'Lips on Mine' and 'The Mask' also became number 1 hits. This made them the first Dutch artists to score four number 1 hits in one year

In 2010, Nick & Simon were on TV again, this time as coaches of the talent show 'The Voice of Holland'. In that year, you also saw them in their successful TV show "Nick & Simon The American Dream", which resulted in three English-language bonus tracks for their single 'Een Zomer Lang'. In 2011, Nick & Simon gave four sold-out Symphonica in Rosso concerts at the Gelredome. They got a tile on the Walk of Fame in front of the stadium. The following year they can be seen as coaches in 'The Voice Kids', and in their own program 'Nick against Simon'. In 2012 they will perform for the first time in Royal Theatre Carré

2013 is a special year as Nick & Simon set a world record in the Guinness Book of Records with their song 'Julia'. This record was achieved because they also released 153 singles with the single, all with a different female name. They not only scored a number 1 hit in the Single Top 100 but also their first number 1 Top 40 hit. It's a year full of success when Nick & Simon end the year with a new record: 7.5 years uninterrupted with an album in the album top 100.

After the TV shows 'The American Dream', 'Die Suid-Afrikaanse Droom' and 'The Caribbean Dream', Nick, Simon and Kees Tol will be on TV in 2016 in the fifth season of 'The Dream'. 2016 is also the 10th anniversary of Nick&Simon, which they celebrate with an anniversary concert in Ahoy. This was such a success that they added three more anniversary concerts

In 2017 the men will release their seventh album: "Pleased to meet you. With this album they also started their eponymous theatre tour, where they performed their songs in various theatres in the Netherlands. In 2017 and 2018 the duo gave a total of 57 performances in 55 different theatres and theatres throughout the Netherlands.

In 2019 they can be seen for the eighth time in 'The Dream', which takes place this year in Malaysia. For the first time the duo is in Asia and released the English-language single 'Kasih Sayang'. In the same year, Nick and Simon gave their first concert of their own in a completely sold out Ziggo Dome. This year they will also go on a club tour throughout the Netherlands with the title 'The roof off'.

Nick and Simon are regularly compared with the Dutch Simon & Garfunkel. The men, who themselves have always seen Simon & Garfunkel as a source of inspiration, dive into the life of this duo in 2020 together with their friend Kees Tol with their TV show Nick, Simon & Kees: Homeward Bound.