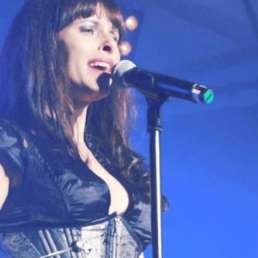 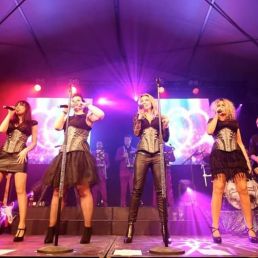 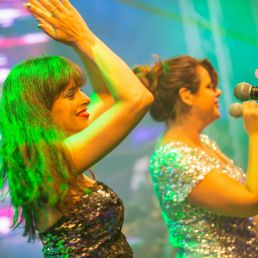 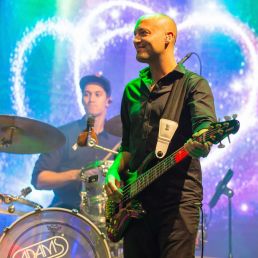 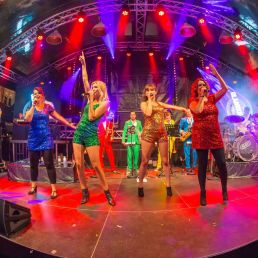 10-piece party band with no less than 4 singers!
Recognizable repertoire with gigantic sing-along content
IF IT'S TO BE A REAL PARTY!

With 10 men Glamourama is the biggest and happiest party band in the Netherlands. This colorful show band immediately stands out because of the 4 (!) singers on the front, who with their infectious enthusiasm and cheerful repertory-with-high-meal content the audience knows how to get every performance. The band members of Glamourama! have fun while playing and the energy that splashes off the stage is immediately passed on to the audience present

The repertoire is surprising and versatile: more than 100 hits are fired at the audience at high speed and the setlist consists of musically high quality medleys of the most famous party songs (think of the Toppers in Concert or the Foute Uur by Q-Music and you have a good idea of what Glamourama! plays). But the repertoire also contains a lot of disco and dance classics and the biggest hits from the 80s, 90s and 00s. SPECTACULAR, RECOGNIZABLE AND SOMETHING FOR EVERYONE!

For over 10 years Glamourama has been at the top of the events circuit and the band is much in demand at the bigger events and festivals, they played at the Nijmegen Four Days Marches, TT Nacht Assen, Pink Monday Tilburg, Zwarte Cross Festival Lichtenvoorde, North Sea Regatta Scheveningen and many big company parties for Akzo Nobel, Scania, Douwe Egberts, Ben & Jerry's, Deloitte, Hero, Ministry of Finance and many others.

The artist is residing in GiethoornTravel expenses are based on your event location.

Hire or book Glamourama! is best done here via Showbird.