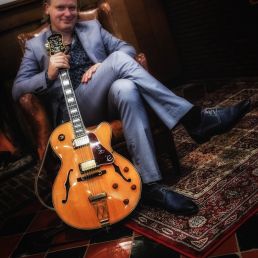 Tom Klein is a solo guitarist with extensive experience performing at home and abroad. In a mix of jazz, Latin and pop he creates the perfect atmosphere that contributes to a pleasant gathering of people. This is also possible with a limited volume, so that guests can talk well.

Tom Klein graduated as a performing musician guitar and has built up quite a name. He works with Thijs van Leer, Robert Long, The Beets Brothers, Jan Akkerman, Marlies Claasen and The Rob Mostert Hammond Group. With this last greeting he recorded a cd in America in the famous Blue Note Studio of Rudy van Gelder. Besides performing guitarist Tom is also a gifted composer. He provided many a film, documentary or commercial with music. Especially the soundtrack for the National Geographic documentary "Sailing for Victory" attracted a lot of attention.

The artist is residing in ZutphenTravel expenses are based on your event location.