Band , Soul/R&B
The artist is residing in Amsterdam 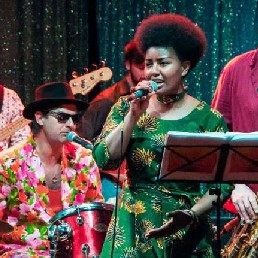 ​It's a spicey mix of veterans and young bloods.
A juicy rhythm section around a powerful horn sound.
Earthy, Chicago funk grooves to make you move. Horn textures made of golden syrup, and a whole lot of fun!

WeaaH founder, composer, and bandleader, Paul Mundy is from New York state in the U.S., and was a Chicago based musician for many years. Paul has shared stages with well known artists such as Buddy Guy, Eric Clapton, Larry Coryell, Martha Reeves, Jerry Butler (the Impressions), Grammy nominated Angel Melendez and the 911 Mambo Orchestra, and played in venues such as the Chicago Jazz Festival, North Sea Jazz festival, the Tonight Show with Jay Leno, the New Orleans Jazz and Heritage festival, VH1, and many more. Paul assembled this cast of funkateers in Amsterdam, who hail from the Netherlands, the US, New Zealand, Kenya , and Greece.

Weaah
Feel the Funk (With Us)

Weaah
Quit Messin' with My Thermostat

Weaah
Your Life
Do you have a question or wish regarding the repertoire? Mention it in your request.

Hire or book WeaaH is best done here via Showbird.
This act is suitable for event types:
Wedding Birthday Celebration / Jubileum Student party Sports event Funeral Business party Reception Fair / Congres Opening Horeca line-up Festival Shopping / Market Holiday / Local feast
You have 1-on-1 contact with the artist
or his/her personal manager.
Do you have a question about this act?
Pose it in your request for the artist.