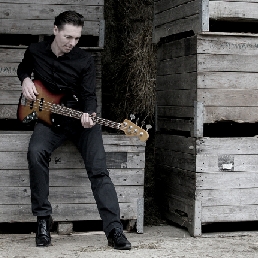 In combination with one of Holland's top blues guitarists, Thijs Westenberg and the accompaniment of the experienced blues rhythm tandem Marco Groen and Wilco Jansen, the performance will be a real blues party. This is how it must have been in the old days, in juke joints and in Chicago bars and clubs. Hours under the spell of the blues!

Because of its compact formation, Big Mack is also ideal for smaller nightlife venues. With Big Mack the blues audience can go completely crazy!

Tuhirangi Hawtin - Lead Vocals
Tuhirangi is far from ordinary. He belongs, as Maori, to the original inhabitants of New Zealand. A minority group within the New Zealand population that has known a lot of blues in the past. And those blues belong to Big Mack. At the beginning of this century Tuhirangi left the land of the long white cloud behind and moved to the village of the Ribs & Blues, Raalte. As a singer he knows how to take the audience on a journey with his mother tongue English and tell his story.

Wilco Jansen - bass guitar
After seeing the blues movie 'Crossroads' and a first visit to the North Sea Jazz Festival (a.o. Robert Cray and the BB King blues band) he was captivated by the blues. More than 30 years ago now... Since the late 80's Wilco has played as a bass player in a number of blues-rock bands. According to Wilco: 'playing bass guitar is simple, simple basses is the challenge'. His talent for planning and organizing is useful, indispensable is his unbridled dedication. If you want to share or hear stories behind the blues, walk to Wilco..

Thijs Westenberg - guitar
As an experienced blues guitarist, Thijs knows better than anyone that it is the tone that makes the music. Few words are needed when he lets his guitar speak. His sound is emotion and touches you full in the heart. Every aspect of the blues you will feel when Thijs plays his guitar. From the dark loneliness to the happiness of being together. The story in the music matters. He also tells his own stories in instrumental chords and solos, laying the foundation for Big Mack's own songs. His creativity and striving for better than best is of great value. Not only in the field of musical presentation but also in the design of this blues formation. Thijs, the heart of Big Mack..

Marco Groen - drums
Less turns out to be more... a snare, hihat and bass drum is more than enough to blues! Many people get into a trance because of the delicious blues rhythms Marco manages to impose on the audience for hours on end. A best basis for Big Mack!

Band is in possession of vocal installation.

The artist is residing in RaalteTravel expenses are based on your event location.