Singing group , Dutch
The artist is residing in Rosmalen 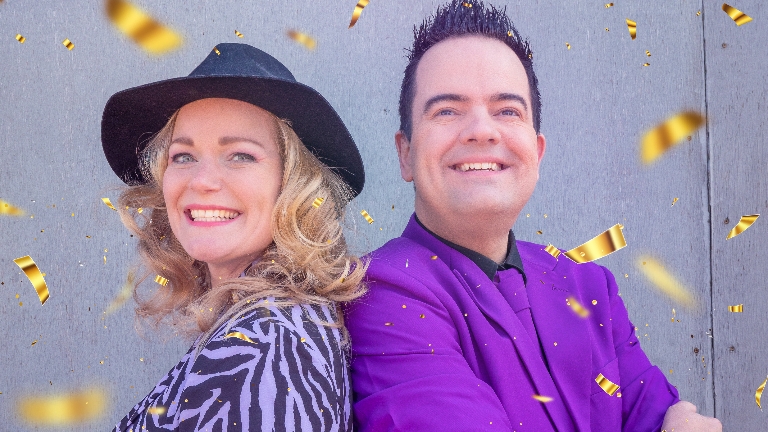 'KonFetTi' is THE sensation of the Netherlands, consisting of Fleur and Aaron Dijsselbloem. They look forward to beautifying your event. Book KonFetti now through ShowBird!

Party duo KonFetTi consists of Aaron Dijsselbloem and Fleur Janssen.
Fleur is a creative jack-of-all-trades who lives in Lent and sings, acts and started her own 'Studio Fleur Janssen' after her education in photography. The unique combination of photography and passion for music & theater makes the creative circle complete for Fleur.
Aaron is also active under the name Aaron D. and scored earlier with several singles in the national charts.

In 2012 the duo released their debut single "Konfetti Barst Los!"
Many performances around the country and a radio tour follow. With successors such as 'Ik Blaas Een Kusje' and 'Dans De Tralala' the duo even scores TV appearances with Toppers van Oranje and Oranje Party. The cheerful music video for the single 'Zomer' (Summer) with rapper Maurits can even be seen frequently on the popular Flemish TV station Ment TV in 2018.

The singles 'Jij & Ik' and 'Dokter Bernhard', a cover version by Bonnie St. Claire & Ron Brandsteder, are real sing-alongs and are in 2021 and
2022 on the famous Dutch radio stations.

All video clips can also be viewed on YouTube and TV-Oranje.

A performance by this hilarious duo means 30 minutes of entertainment with lots of interaction and a high party content with party hits like "The Toreador", "Blood, Sweat and Tears", "Live", and much more.

On request this program can be extended with a kids show, Hot Summer Dance Experience or a full-day concept with DJ, face painting and a mini disco.

They are ready for it ... you too? Then the adventure can begin.

Hire or book KonFetti is best done here via Showbird.
This act is suitable for event types:
Wedding Birthday Celebration / Jubileum Student party Sports event Funeral Business party Reception Fair / Congres Opening Horeca line-up Festival Shopping / Market Holiday / Local feast
You have 1-on-1 contact with the artist
or his/her personal manager.
Do you have a question about this act?
Pose it in your request for the artist.