Band , Tribute
The artist is residing in Amsterdam 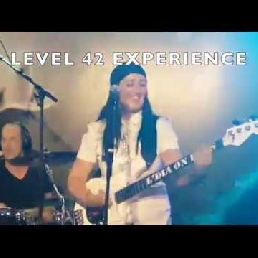 Normal space for 4 people with instrumen

Heathrow is a 4 stubborn band, led by a WOMAN bassist, who is hardly distinguishable from the real Level 42. Next to a number of big hits they also play old work of Level 42 in which especially the bass guitar is central.

LEVEL 42 TRIBUTE BAND: "HEATHROW"
The English funk band Level 42, with singer/bassist Mark King, inspired L'dia On Bass to start playing bass guitar. She quickly mastered the special 'slapping technique' (hitting the bass strings with her thumb) and founded a number of bands where she performed as bassist/singer throughout the Netherlands.
She worked with, among others, Toots Tielemans, Marcus Miller, Victor Bailey and toured with Edsilia Rombley. She drank coffee with Larry Graham (the slap pioneer), became known on YouTube (3 mln. views, which earned her a Fender-endorsement, among other things), and has been part of the clan of Trijntje Oosterhuis, Berget Lewis and Candy Dulfer for a number of years.
With a crackling career as a musician it is now (again) time to honor her old heroes. She founded her 'nostalgia' band Heathrow with her friends/musicians, who have also earned their spurs in Twarres, Hans Dulfer, Clanned, Toots Tielemans, Marcus Miller, Fox the Fox, Turks Fruit, and many more. All these guys have the same Level 42 passion. Because of large individual crowds, they put Heathrow on the back burner, but now it's starting to tickle again and they're going crazy again. The love of music!
L'dia on Bass - Bass, vocals
Johan Schlecht - Keys, leadvocals
Sietse Huisman - Drums
Jeffrey Smith - Guitar

Hire or book Level 42 Tribute band "Heathrow" is best done here via Showbird.
This act is suitable for event types:
Wedding Birthday Celebration / Jubileum Student party Sports event Business party Fair / Congres Opening Horeca line-up Festival Shopping / Market Holiday / Local feast
You have 1-on-1 contact with the artist
or his/her personal manager.
Do you have a question about this act?
Pose it in your request for the artist.