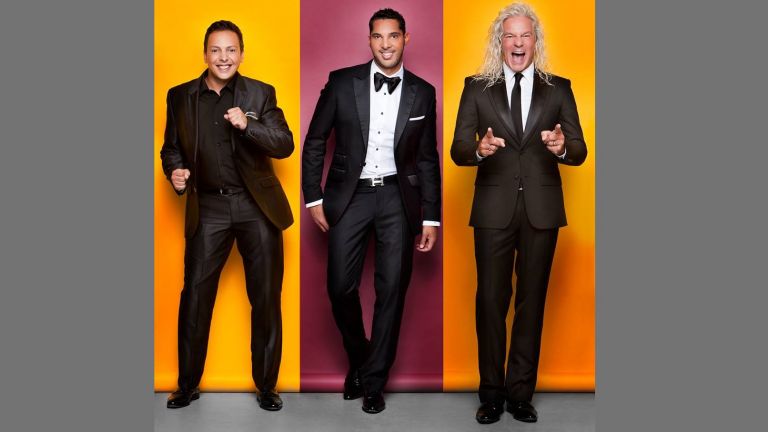 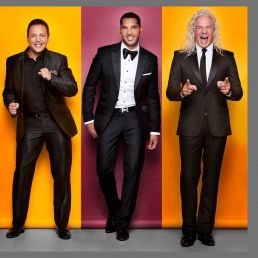 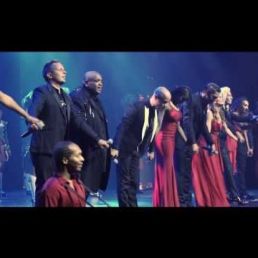 LA The Voices: is the name of the Dutch men's group that saw the light of day in June 2010. They guarantee spectacle at your event. Book LA The Voices now via ShowBird!

LA, The Voices guarantee a melting pot of pop and classical music at a high level never seen before in the Netherlands. Here are five men, each with individual qualities, who together guarantee goose bumps and emotion in music.

The price does not include Buma costs. In addition, the act has sound for up to 250 people.

Gordon, Tineke de Nooij, Rick van Schooten of Sony Music and producer Bas van den Heuvel chose the four talents Remko Harms, Roy van den Akker, Richy Orson Brown and Peter William Strykes through auditions from over 200 candidates. Together with Gordon they form the singing sensation LA, The Voices. The world famous Metropole Orchestra was approached and the combination of great voices and top musicians was a fact. For the first album, Los Angeles, fourteen songs were recorded in both the Netherlands and Belgium, and accompanied by the Studio Symphony Orchestra conducted by legendary conductor Dick Bakker. He chartered big names, including Carl Rasmussen from Sweden and Tom Trapp from the US, to make arrangements for the orchestral, bombastic pieces of music. Ron Stoeltie, station coordinator of Radio 2, was equally enthusiastic when hearing the repertoire and an alliance with the station was born.

The first single from LA, The Voices, Stay safe with me, was released on September 10, 2010 and the album Los Angeles shipped out on November 19, 2010. The group sings mostly in Dutch, with trips to English, French and Spanish. With vocals that vary between classical tenor, baritone, pop and even rock, the men hope to give a clear musical calling card to the Dutch music industry. The song S.O.S. d'un terrien was sung in November in Paul de Leeuw's MaDiWoDov Friday show, after which the demand for the album exploded and within no time the golden status was reached. A dream come true for the men. The album remained in the top 5 for weeks and the platinum status was quickly achieved. The special 'making of the voices' was broadcasted on RTL4 and the men gave an amazing first concert in royal theatre Carré which was also broadcasted on RTL4 on New Year's Eve December 31st 2010. The men of LATV had definitively established their name in the Dutch music industry. One of the big highlights was that the men were guest artists at the Toppers for three days and in one weekend they performed for a huge amount of people.

After a year of great triumphs in the Netherlands, a second album couldn't be missed, so the men flew to South Africa to take great photos with their top photographer Nick van Ormondt for their second album "Because we Believe". This album was released on November 4, 2011. The first album surprised friend and foe and the melodies were eagerly sought after by a large and wide audience. It was therefore obvious that this aspect of the album was elaborated on, resulting in a worthy and powerful successor. Once again, there was no deviation from the use of a large live orchestra on the successor Los Angeles, The Voices II - "Because we Believe" and the sound of LATV is guaranteed to remain bombastic, sensitive, profound, but above all musical and accessible to everyone.

And once again we have chosen to sing in several languages. On Los Angeles, The Voices II there are Italian, English and French classics. Songs that will make many a heart beat faster again. The first single "Loop to the light" was released on September 15, 2011 and resulted in the biggest hit of the men who have been in the top 10 of the charts for weeks! Gordon composed (music and lyrics) the impressive "There goes my Heart", an adaptation of Edvard Grieg's "Morgenstimmung" and is already called the jewel of the album by musical friends of the group. The fact that the men of LATV have been together a lot since a year can be heard in the more harmonious vocals. The many performances and promotional trips have paid off in the studio and eventually on the album. With a very own identity in personality and voice is precisely what makes LATV so special. A colourful company with a very good energetic appearance on stage. Everyone has their own highlight on this album, Peter Strykes' voice has come into its own much more and only now it really becomes clear what kind of range Remko Harms has. Once again Richy Brown surpasses himself with several ad-libs and he draws for the arrangements for the vocals again. For Roy van den Akker this album must have been a gift because he too can amply show what quality he has in house. And also Gordon shows again that he has to be taken seriously as a singer. With each his own sound but still the wonderful ability to sound as one, the men of LATV have delivered another jewel, Los Angeles, The Voices II - "Because we Believe" an album that will impress many people

Hire or book LA The Voices is best done here via Showbird.
This act is suitable for event types:
Wedding Birthday Celebration / Jubileum Student party Sports event Business party Fair / Congres Opening Horeca line-up Festival Shopping / Market Holiday / Local feast
You have 1-on-1 contact with the artist
or his/her personal manager.
Do you have a question about this act?
Pose it in your request for the artist.

The artist is residing in Broek op Langedijk