Band , Coverband
(33 reviews)
The artist is residing in Elst (Gelderland)(NL) 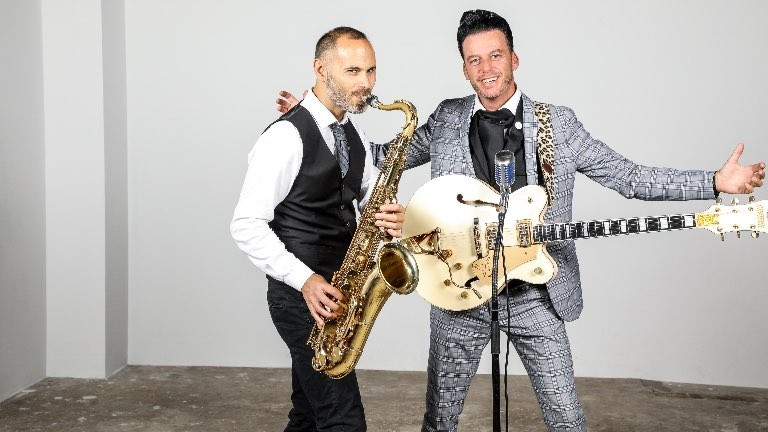 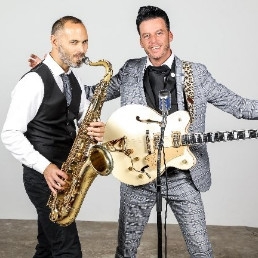 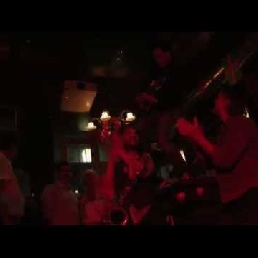 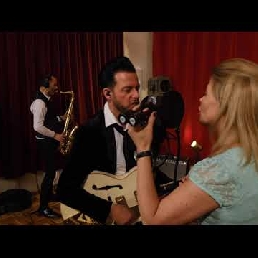 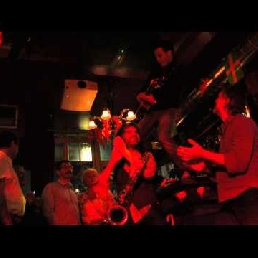 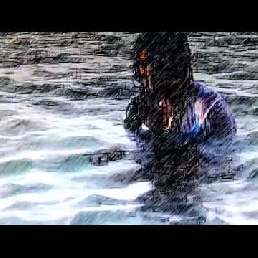 Howling Guitar & Swingin' Saxophone Two musicians, one an unadulterated rocker and entertainer, a singer/guitarist who doesn't turn his hand to Gypsy jazz and Spanish guitar, the other a dyed-in-the-wool saxophonist who has Jazz, Soul and Rhythm & Blues flowing through his veins.

William Smulders and Maurice Smit together form an inspired duo that manages to merge various musical styles into a unique sound of their own. Swinging recognizable hits from the 50s to 80s form the basis for a complete evening of live music and entertainment. A steaming Rock 'n' Roller like 'Blue Suede Shoes', the saxophone hit 'Tequilla' or the Latin classic 'Demasiado Corazon', Wiliam Smulders & Saxotone get their feet off the floor with their passionate playing and infectious enthusiasm.

A virtuoso duo with the functionality of an entire band, one moment subdued in the background, the next full swing between the dancing audience.

Jazz & Blues festivals, fairs, weddings, birthday parties, events or just an old-fashioned evening of rocking in the pub, these likable musicians are at home everywhere and make the atmosphere complete.

Elvis Presley
Always On My Mind

Peter, Paul and Mary
If I Had a Hammer

Danny Vera
Too Much Love Will Kill You

Elvis Presley
All Shook Up

Elvis Presley
Are You Lonesome Tonight

Glee Cast
All You Need Is Love (Glee Cast Version)

Pentatonix
Hallelujah
The Beatles
Let It Be - Remastered 2009
Do you have a question or wish regarding the repertoire? Mention it in your request.

Really a top-act without fuss. Know how to take the audience along with them in their performance. Nothing but praise!

William performed during the relatives day at our residential location. Residents and relatives enjoyed the performance.

Top performance at the residential groups

He performed at the residential groups with his guitar. Played for 15 minutes at each housing group. Many enthusiastic residents and staff who danced, clapped and sang along. At 1 group there was even a resident who participated with her own instrument, so much fun:)

He received many compliments from the residents and staff :)

Top performance, our clients enjoyed it, thank you!

William Smulders gave a musical performance at the Hoogstede location on 23 June 2021. The residents were all very enthusiastic and some of them even made a dance, even in a wheelchair. During the music they enjoyed a snack and a drink. This performance is really worth repeating.

The residents of Hoogstede enjoyed the performance.

William was able to sing outside with this beautiful weather. The residents enjoyed it with a snack and drink. Super weather.

The performance was super good. It was an outdoor performance and the weather was great. Nice interaction with the audience.

Looking for a fun afternoon?

It was a great afternoon

The music was really great, great quality but also the songs. The songs that were played matched the residents. They had a great afternoon, especially thanks to William Smulders and Lieke Grey.

It was a fun and enthusiastic performance.

Nice interaction with the residents.

My mother had a great birthday thanks to the great performance of William Smulders. Evergreens for an hour. She turned 75 today and he gave a coronaproof gig at Villa Vrijland. Highly recommended. A day with a golden edge. Especially thanks to the nice and sweet staff.

Can sing well and responds very well to the situation.

Would definitely book him for my next party

We saw William Smulders perform a few years ago when we were on holiday in Centerparks Zandvoort. It was a pleasure to listen to. Also the interaction he had with the audience was TOP

We would book William again and recommend him to others!

Professional singer with attention for the guests and well responding, fantastic.

Hello William and Lieke, Just a personal email to thank you for a fantastic afternoon. I am 100% satisfied with the presentation, singing and how everything went. Everything was simply great and my guests had the same opinion and my wife has yet to recover from the surprises that day. At the next party I will definitely ask you again and don't even look any further

They are an enthusiastic duo and very flexible

Live duo William Smulders & Lieke Grey concluded our ceremony in a beautiful, cheerful way. Gives a very nice own atmosphere and was a much appreciated addition to our wedding toast! In the background and at the same time pleasantly present. The guests regularly came to us with the question where did you arrange such a nice band? Nice anyway!

Bye Lieke and William, thanks again for your great performance at our wedding! We have only received compliments!

Thanks again and who knows until next time

We would like to thank you for the special Saturday night on April 27th. In addition to the conviviality among the people, we have greatly appreciated your input and music. This did not lead to a full dance floor, but many people present complimented us on your music and the cozy, relaxing atmosphere. We are happy to convey that to you

How much we enjoyed your band at our wedding!

You guys responded well to what people wanted to hear. Thank you so much again.

Hi William, we didn't speak yesterday. Hence this message by mail. We want to thank you for your contribution to the success of our party at the Wolfsberg, it was great! Thank you very much.

Great performance. Surprising, own style, very good guitar playing and surprising voice Thanks and till next time

We've been really happy with you

Hi Wiliam! It's been a while, but better late than never. I wanted to say that my parents (and the rest) enjoyed your performance! We've been really happy with you. Had to be said

We often have a party here and there and when we say goodbye you never hear anything about the band. With us it was a bit different, one after the other, thanks for the party, food was good, but that music was cool! The photographer, who is a fan of Elvis himself and has been performing with his wife for years, asked us to let him know that he liked you so much. The owner of De Lodge, Walter Kats, who has been organizing parties for decades, came to let us know this morning that it had been a very long time since he had had such a good band!

We were very happy with it, thank you!

William Smulders sang at our 10th wedding anniversary. With his beautiful voice and great guitar playing he entertained the audience very well.

He gives a nice atmosphere to your party!

Unbelievable how many different songs he can sing

I can advise anyone looking for a good, nice and atmospheric entertainer to book William for the party.

Back to the seventies

William arranged a swinging seventies party at our Golf Club. We look back on a very successful afternoon. It was great!

Hire or book William Smulders duo (Saxophonist) is best done here via Showbird.
This act is suitable for event types:
Wedding Birthday Celebration / Jubileum Funeral Business party Reception Horeca line-up Shopping / Market Holiday / Local feast
You have 1-on-1 contact with the artist
or his/her personal manager.
Do you have a question about this act?
Pose it in your request for the artist.