The Boss Brothers (A tribute to Bruce Springsteen)

Band , Tribute
The artist is residing in Etten-leur 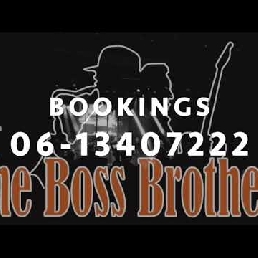 With this top tribute you will experience a concert of Bruce Springsteen & the E Street band that can only be surpassed by The Boss himself. Which Springsteen song would you like to hear during their performance? Call them! Nobody wins unless everybody wins!

American rock icon Bruce Springsteen and his E-Street band have been at the top of the international music scene for over 40 years. In addition to his many hits and versatile repertoire, he is best known for his legendary concerts that regularly go over 3 hours. With a lot of energy, passion and emotion he takes the audience to unprecedented heights.

Since 2011, our Bruce Springsteen Tribute 'The Boss Brothers' has become a real crowd puller.
We give Springsteen concerts in theatres, festivals and various catering establishments, which can only be surpassed by The Boss himself.
With performances throughout the Netherlands and Belgium, we have already convinced the organisations and our still growing following.

Hire or book The Boss Brothers (A tribute to Bruce Springsteen) is best done here via Showbird.
This act is suitable for event types:
Wedding Birthday Celebration / Jubileum Student party Sports event Business party Fair / Congres Opening Horeca line-up Festival Shopping / Market Holiday / Local feast
You have 1-on-1 contact with the artist
or his/her personal manager.
Do you have a question about this act?
Pose it in your request for the artist.