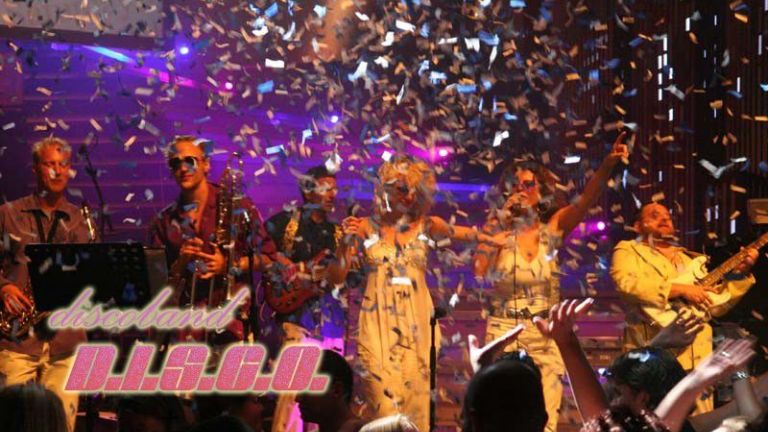 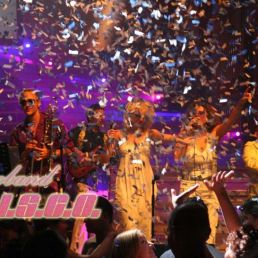 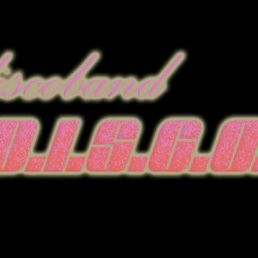 first of all, NO, this is not an all-rounder. This is the first, and still the best, live disco tape of the Benelux since its creation. 9 artists in a fixed line-up with three horns and three voices.

We don't play the wrong songs, we play the right ones!
Find out why big bookers put this band down when a good disco band is needed.

General Information
Here it is: the only 100% specialized disco tape. Experienced since 1988 and averse to all trends. The band that creates an exciting and very danceable image of time at every glitter party. Recognizable for an adult audience. And with a presentation so contagious that she also gets the one who hasn't experienced the seventies on the dance floor. With this band you are assured of more than a 'show block'. Go for the real thing, you can be guaranteed an unforgettable evening in style.

D.I.S.C.O. is not a gimmick, but now for 25 years a fully specialized disco band, and for disco parties now an unmatchable live act. From Den Helder to Maastricht. At home and abroad. Your party is in good hands.

Find out why this band is the first to be called by renowned bookers. We'll take you back to one of the most exciting times in music history.

Immerse yourself in the top hits of a carefree time. With an evening of energetic, positive atmosphere. Hear real instruments played by musicians of flesh and blood. In a colourful show full of tinsel and brass. And above all... Enjoy a stream of great dance music!

D.I.S.C.O. consists of a group of pure lovers. With this band you are assured of more than one "show block". We have as much seventies repertoire as a DJ! So go for the real thing, the price will surprise you.

Other information
This is the only 100% live, 100% disco classics, 100% party non-stop disco band. Real party music played by only real lovers of the genre. Complete with show decor and show outfit.
The band also plays on a puncture base which makes D.I.S.C.O. attractive for party cafes that do a "back to the 70's/80's evening. (The band has special rates for weekly music cafes without entrance fee ask for this)