Accordionist
The artist is residing in Bilthoven 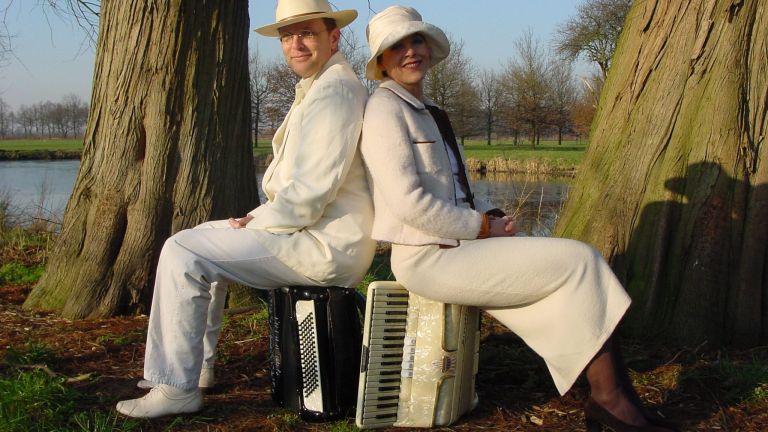 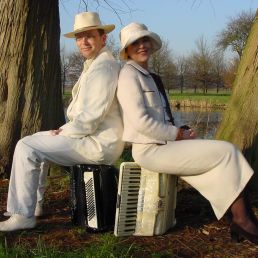 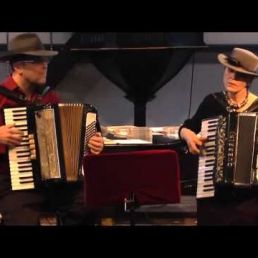 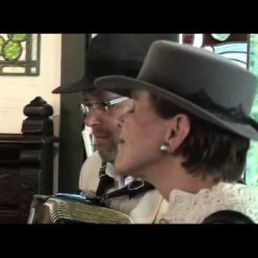 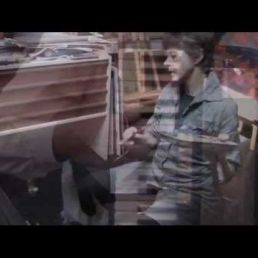 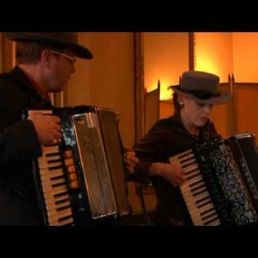 2x3 meters. We always bring our own crut

Two accordions flirting with each other, challenging each other, bickering and hugging each other. Pearls from the South American and French tradition, dancing on clouds in a world of keys, bellows and sky. Spicy harmonies from the sun-drenched Mediterranean and Caribbean bring Dutch butterflies to mind...

Reference
Ministry of SZW: "Compliment for the cooperation beforehand and the quality of the musical presentation during the presentation of the Joke Smit Prize" - I.#####, project manager.

Concerts and sparkling musical accompaniment with mostly own work, with influences from all over the world: not only stimulation of the senses, but also space to get in touch with your own memory or suspicion of simple beauty. Music approached as a Haiku, feeling expressed as sound. This is what these two musicians try to get out of their two accordions in a program with poems, quotes, anecdotes and ...especially music.

Their first CD L'imparfait du Cœur was released in 1998, and was voted the best accordion CD of 1999 by the Swedish accordion magazine Dragspels Nytt. As a result they played at festivals in Iceland and Denmark in the summer of 2000 and 2003. Later followed Germany, Engelenad, Egypt and Norway (2016).
Since 1999 Accordeon Melancolique has given hundreds of concerts. About seven CDs, with many compositions of their own, find their way to music lovers all over the world. Six sheet music collections have been published in the meantime. They are used enthusiastically by musicians and music schools. The appreciation for their music is also shown by its frequent use in films, documentaries, dance and theatre productions, commercials etc.

Reference
Nissan Europe N.V.:
"Many expressions of enthusiasm from both journalists and Nissan rep- resentatives. "Accordéon Mélancol- ique" added that extra touch of mari- time flavor and blended in well with the atmosphere on board." T. Holmes, Manager.

Performances tailored to the wishes of the client:
* Egypt, during Oranjebal 2013. Dutch Embassy Cairo. * Concert of 20 minutes during the Joke Kool-Smit award ceremony
with Minister de Geus, former Minister de Boer, Noraly Beyer,
president of the Nederlandsche Bank Nout Wellink. NL
* A musical sketch for a congress of complaints officers
in hospitals. With poems, specially written anecdotes. * A mini-concert during a congress on Dune conservation in the
Museon in The Hague

Where else do you hear their music?
* If you see the American movie "Picasso and Braque go to the movies", pay attention to the music. Producer is Martin Scorsese !
* The music at the Vodafone advertising with floating mill.
* Music from the CD "Parade des Poules" has been used for the
IKON TV documentary Oud en der dagen zat.
* Audio tour for visitors of The National park on Ellis Island/
New York, USA, The information on this MP3 player is being erased
cello with music by Accordéon Mélancolique.
* If you go to Paris, there's a good chance that your Accordéon-
Melancolique belongs on the information channel in as many as 50 hotels. * The radio program "The Walking Branch" spent an hour
long attention to music by Accordéon Mélancolique.
And at many documentaries

Hire or book Mélancolique Accordéon is best done here via Showbird.
This act is suitable for event types:
Wedding Birthday Celebration / Jubileum Business party Reception Opening Horeca line-up Shopping / Market Holiday / Local feast
You have 1-on-1 contact with the artist
or his/her personal manager.
Do you have a question about this act?
Pose it in your request for the artist.

The artist is residing in Bilthoven