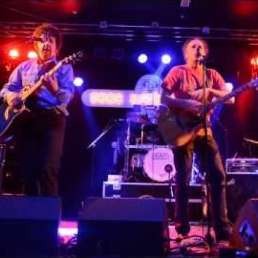 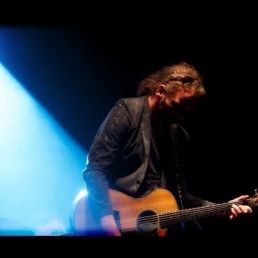 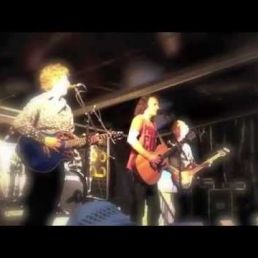 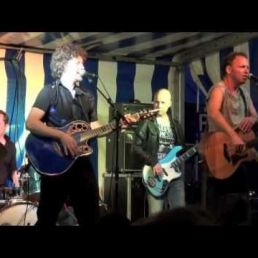 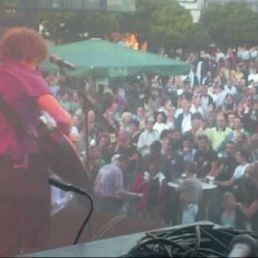 Two acoustic guitars, bass, drums and three-part vocals have been rocking like crazy for decades.

"How is it that band can play all those requests?
'How is it possible that they do everything on acoustic guitars, from disco to hardrock?!'

kbam also a band for wedding or festival.
Ocki Klootwijk and Anton Arema at K'BAM!
K'BAM! is a band that is being talked about.

The guitarists of K'BAM!, the acoustic rock band, leave their electric guitars and amplifiers at home. This way the band is not stuck to "sounds" and they can get completely immersed in what it's all about: playing lots and lots of songs. The band has a huge repertoire of English pop covers and doesn't commit to any style.

This makes K'BAM! extremely flexible and the band is called a "living jukebox"; with great regularity they play what the audience is calling. Rock, blues, funk, disco, reggae or country; the gentlemen don't turn their hand to it.

The choice of acoustic instruments gives the band a pleasant sound. Also the bass player and drummer don't drag boxes full of superfluous equipment with them. Just basic instruments and the power comes from the men themselves.

K'BAM doesn't hide behind sophisticated appliances but supplies the desired energy from its own biomass. And in this way they can rock harder than an ordinary cover band if desired.

K'BAM! consists of four seasoned musicians with a rock background but also with enough experience and craftsmanship to feel every situation. Whether a party needs to be musically framed or a pub needs to go crazy; K'BAM! plays the right songs at the right time. K'BAM!: no stuff, but play!

The artist is residing in Capelle aan den IJsselTravel expenses are based on your event location.