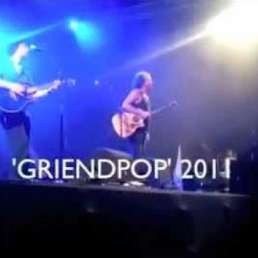 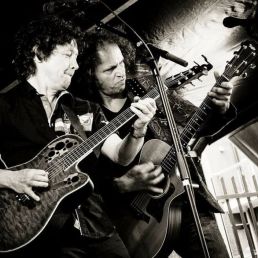 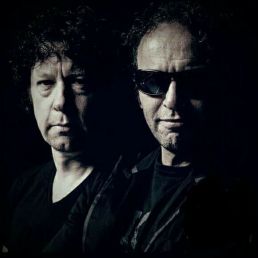 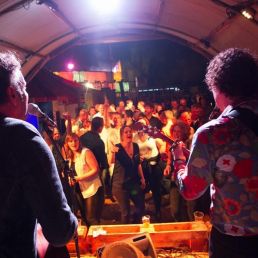 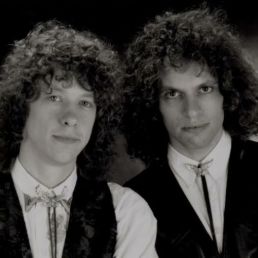 Acoustic rock duo since 1992 with a wide repertoire of English pop music.

Big Bucks and Easy Money is the duo of Blue and song cannon Anton Arema. They met each other in 1992 at the Rotterdam Conservatory. Easy was a graduate classical guitarist and Big was a practitioner with about 20 years of stage experience.

Together they got their diploma for pop teacher and founded the duo. In the years that followed they became more and more skilled in playing on many different occasions.

Big, a fast-fingered string wizard who was mainly occupied with fast riffs and solos and Easy, a craftsman who knew a lot of songs. They learned from each other and discovered ways to present the most divergent styles in a convincing way with only two acoustic guitars. They play pop, rock, country, blues, soul and when they're on their feet even disco. Various songs by a.o. The Beatles, Johnny Cash, Nirvana and Pearl Jam are brought with verve.

Because of their vast experience, Bucks & Money are in place at both neat receptions and rugged village fairs. They feel the atmosphere flawlessly and are able to fulfil a surprising number of requests. If desired, they can accompany a song and regularly give the microphone and/or guitar to someone who feels called upon to sing a song as well. Every performance is therefore completely unique. Since their foundation Big Bucks & Easy Money have taken the stage about 2300 times at home and abroad; from living rooms to stadiums.

The artist is residing in Capelle aan den IJsselTravel expenses are based on your event location.