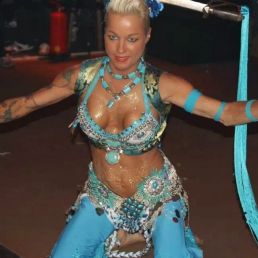 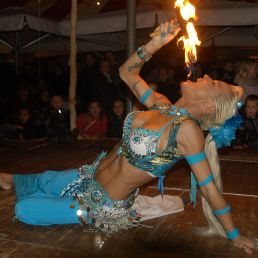 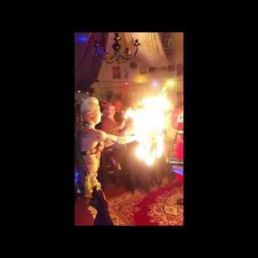 Spectacular show with the elements bellydance, fire(spitting), glass walking/jumping hoses. In this 20 minute act the audience will be actively involved and will participate in fire bites bellydancing and holding a snake.

Miss Nagine with Fakir, belly dance and snake show
A spectacular show in which the elements of a fakir show include a belly dancer and a snake show. This exciting impressive show lasts 20 minutes. Stunts with fire, glass and snakes. All this with the cooperation of the audience. The guests go belly-dancing, bite the fire and are allowed to hold a snake. Suitable for company party, wedding, birthday party and cafe.

Bellydancing
Part 1: Miss Nagine opens her show while balancing with a sword on her head. To Oriental music she shows a belly dance show in which balance and isolation are an important part. After this opening 2 gentlemen from the audience will be transformed into "Arabian princes" and they will try to master the art of bellydancing.

Fire and glass
Part 2: Miss Nagine continues her show with the wheel of fire. A wheel with no less than 6 torches which she lights with her burning fingers. After this, Nagine bites the torches one by one in her mouth. After this stunt, the female fakir spreads hundreds of shards of razor-sharp glass on the ground. She steps and walks through the glass with her bare feet. But she will also jump into it. When Nagine is lying on her back in the glass, someone from the audience will stand on her belly.

Fire breather with fire spit
Part 3: Miss Nagine strokes burning torches over her hands and arms. She even lights her tongue with fire. Someone from the audience may also try to catch fire. This part closes when Nagine spits meters high flames in the air.

Act with hose
Part 4: This show ends very spectacular with a real snake. A Tiger Python of between 2 and 4 meters! Miss Nagine comes to the guests and the guests are allowed to pet the snake. At the end 2 people from the audience may experience what it is like to hold a big snake.

Additional option/addition Measuring & greet with hose
For half an hour the guests are allowed to have their picture taken with the snake.

The artist is residing in BerghemTravel expenses are based on your event location.